Lucky kitten (Maeki Neko) is one of the most common items that will keep accident in Japan. The original Japanese name is Maneki Neko, which literally means the beckoning cat. Kittens luck beckoning their left leg, right leg or sometimes both. The meaning varies by country and location. 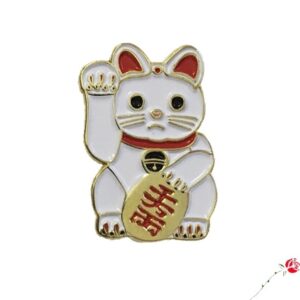 In general, the idea that the left leg touts customers while bringing the right leg waving happiness and wealth. The higher the leg, the greater the happiness.
Happiness Kittens are usually made of ceramic and resemble the Japanese Bobtail. Most wear a collar with bell and below a bib. Some happiness kitten holding a coin down the so-called Koban, which represented great wealth.

There are three kinds of legends about the happiness kittens.
• The tempelkat: A rich landowner took shelter under a tree by the storm. The cat of a poor priest lured the landlord road and a few moments later, the tree was hit by lightning. To thank the landlord made the temple great, rich and successful. When the cat died were pictures of him because he was the instigator of success.
• The poor old woman, an old woman was due to lack of money selling her cat. This cat then appeared in her dream and told her she had to make and sell images of him. This was the Maneki and the woman was very rich.
• The Geisha: The geisha cat began scratching the kimono from her mom and did not stop. Her boss decapitated the animal and immediately the cat’s head flew to the ceiling where the snake bite death. The snake was just about to bite the geisha. Her boss then left a wooden cat figurine in memory. This was the first Maneki.